● Computer software, military equipment, chemicals, and agricultural products are Israel’s main exports.
● The Land of Israel was conquered by the Ottoman Empire in the 15th century, and this dominion lasted until the 20th century.
● Israel has a large IT industry and one of the world’s most technologically literate populations.
While it is well known as “The Holy Land,” Israel boasts many wonders and points of interest for travelers of all kinds. It is a small yet diverse Middle Eastern country with a sprawling coastline along the Mediterranean Sea and a small portion of coastline on the Red Sea at the Gulf of Eliat. Bordered by Egypt and the Gaza strip to the southwest, Jordan to the east, and Syria and Lebanon to the north, Israel is an exciting and divergent spot to visit. The three major monotheistic religions—Judaism, Christianity, and Islam—all have historical ties to the region, creating a vibrant and rich culture with both ancient and modern histories.
Although the state of Israel is a relatively new country (since 1948), its history extends back to the beginnings of human civilization. As you explore the land, you will experience a convergence of these histories, surrounded by crumbling temples and city ruins while a lively, bustling economy and progressive nation thrives around you. It is a highly urbanized and economically developed society still steeped in culture by its influential sites and historical landmarks.
In addition to its quickly rising economy, Israel is a highly educated country. With only a fraction of 1 percent of the Middle East land mass and two percent of its population, Israel has the highest ratio of university degrees per capita in the world, adding to the fascination of old and new traditions combined.
Perhaps one of the most highly anticipated sites of Israel is the Dead Sea, the mystical salt water lake nestled between Israel and Jordan. It is one of the world’s saltiest bodies of water and at its greatest depth, it is the lowest elevation on dry earth (-1,237 ft. deep). Its shores are 1,388 ft. below sea level. The Dead Sea has attracted visitors from around the Mediterranean basin for thousands of years. Biblically, it was a place of refuge for King David. It was one of the world’s first health resorts (for Herod the Great), and it has been the supplier of a wide variety of products, from balms for Egyptian mummification to potash for fertilizers. Despite this, the Dead Sea’s salt content is so high that it cannot actually support any life, hence the name, “Dead Sea.”

Visas to Israel are not required for U.S. citizens. If you hold a passport from another country, please check with your local consulate about requirements for travel to Israel. All passengers traveling internationally are required to have a passport. Please carry proper identification (your passport) on you and do not leave it in your suitcase or hotel room.

The official currency of Israel is the New Israeli Shekel.
1 NEW ISRAELI SHEKEL (NIS) = 100 Agorot
● Banknote denominations: NIS – 20, 50, 100, 200
● Coin denominations: Agorot – 5, 10, 50; NIS – 1, 5, 10
Credit cards are accepted in Israel, and you should have no problems using them in larger shops and restaurants. Visa and MasterCard are most accepted.
The Visa logo by an ATM does not mean it takes all types of Visa cards. We recommend Bank Leumi ATMs, as they readily accept foreign credit cards.

The following budget guidelines are just approximate values or starting values for meals and are per person. Actual prices will vary widely by restaurant and city within a country but below are some averages as provided by our experienced personnel.
The approximate cost of a soft drink/mineral water/coffee is 8-10 NIS.
An average lunch consisting of a salad or sandwich and a soda or water starts at approximately 40 NIS.
A steak dinner at a mid-range restaurant with dessert and a non-alcoholic beverage starts at approximately 120 NIS.

Outside of restaurants or food delivery, tipping is not common in Israel.
● At restaurants, tipping 10-15% is a reasonable amount. 15-20% is considered a very generous tip. Tips are generally left in cash. Not all restaurants accept tips left on credit card payments.
● Taxis are common in Israel. We recommend you negotiate the fare price before entering the taxi; ensure the meter is on before leaving. There are surcharges for calling a taxi and luggage. Tipping taxi drivers is not customary in Israel.
● Hotel staff is not commonly tipped, except bartenders or room service, in which case 10% is an acceptable amount.

Voltage for outlets is 220V. North American voltage is generally 110V. Therefore, a converter may be necessary for your travels. Adapters will be necessary to adapt your plug into the outlet but may not convert the voltage, so both devices are necessary.
Israel uses an adapter that has a round, 3-prong plug (Type H) as well as the more common European 2-prong, type C plug. 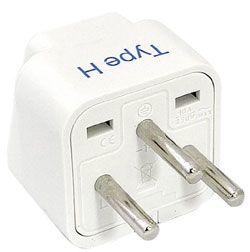 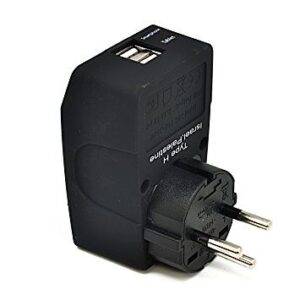 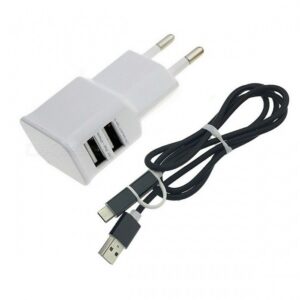 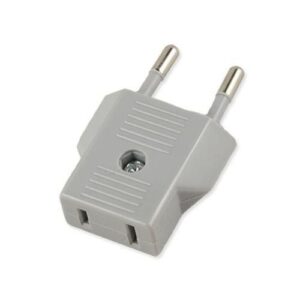 To help you plan, below are average low and high temperatures for Israel. 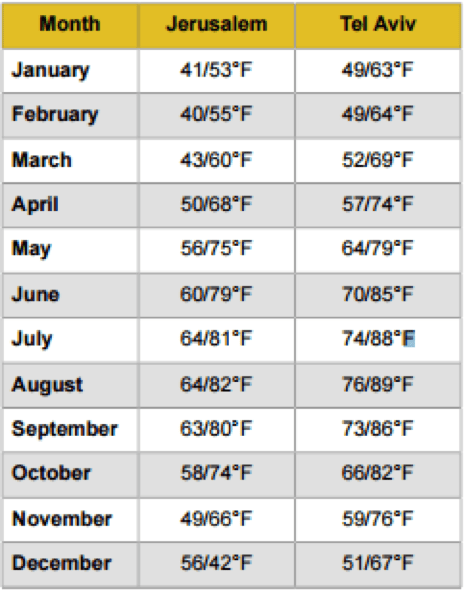 To convert to Celsius, subtract 32, then multiply by 5 and then divide by 9.